It’s getting hotter. We have lost another 1000 meters of altitude. At the end of the day we are at about 750 meters above sea level. We make a stop ahead of Tsavo West National Park, colloquially known as The Man-eater National Park. As suggested by Richard Trillo, an extraordinarily helpful traveler and the author of The Rough Guide to Kenya, we decide to see if we can arrange a back-up vehicle to safely cross through the park on our bicycles. 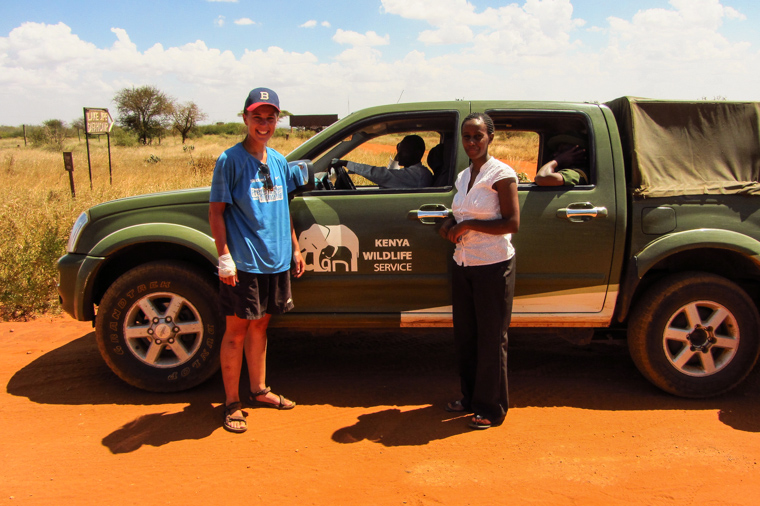 Maureen Elegwa and our KWS escort

We try to get some information at local office of the KWS (Kenya Wildlife Service). Our inquiry is quite unusual and luckily it meets with enthusiasm. As a result, the KWS staff delegates a back-up vehicle to accompany us through the park at the their expense. Maureen Elegwa, a 26-year-old female, is the head of the local branch of KWS. She picks up a rifle and together with three other employees gets into 4×4 Isuzu to assist us for 55 km by staying in sight while driving through the heart of the Serengeti Plains. 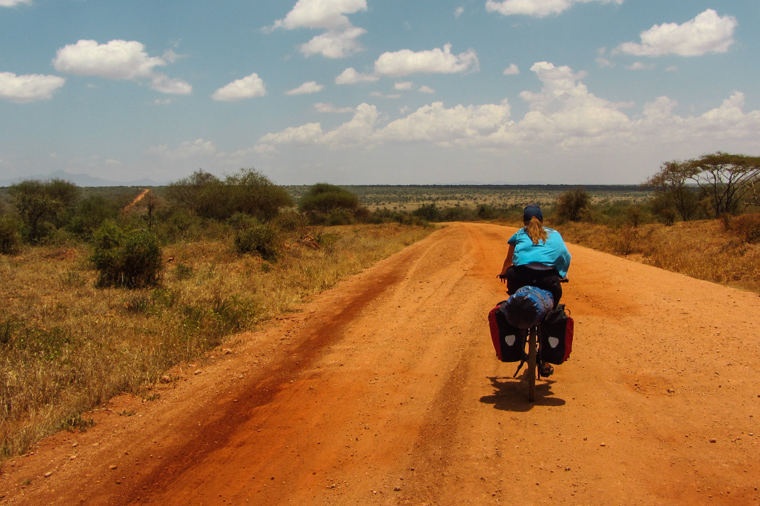 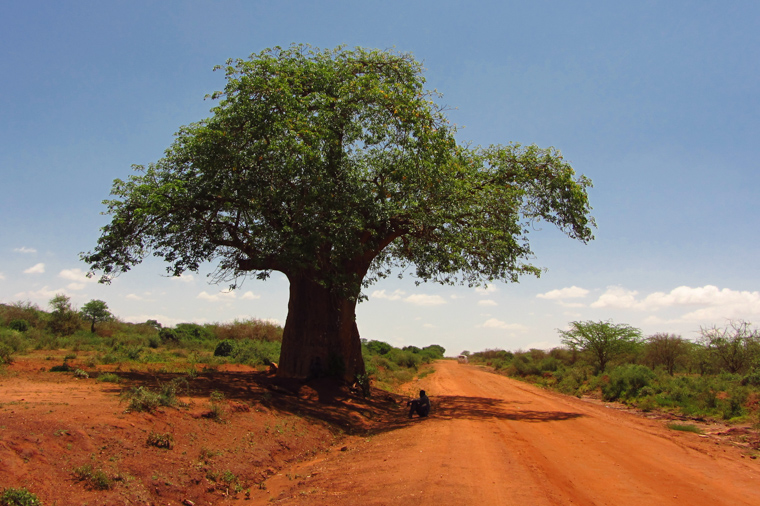 Shade under a massive baobab tree 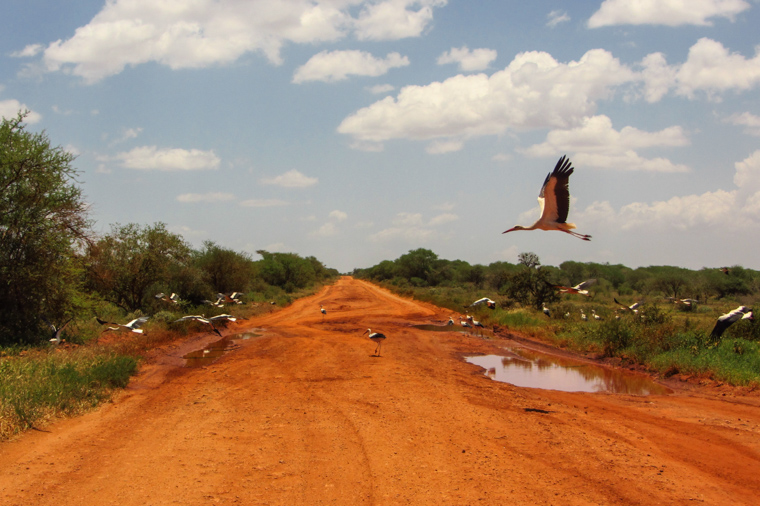 Storks, quite likely coming from Poland

The road is quite bumpy, usually hard and rocky, but sometimes becomes a stretch of deep sand. Landscape is made of low bushes and dried savanna, only from time to time disturbed by a single baobab.

Unfortunately (and actually maybe better for us) we do not encounter any Man Eater lions, only some giraffes and zebras, as well as some huge flocks of storks. Bearing in mind that every fourth stork out of the world’s population originates from Poland, it is quite likely these are the same storks, but spending winter in Africa.

We get to Maktu, where we say goodbye to the KWS crew and thank for their support, assistance and patience, for they have been driving three hours at a crawling pace. 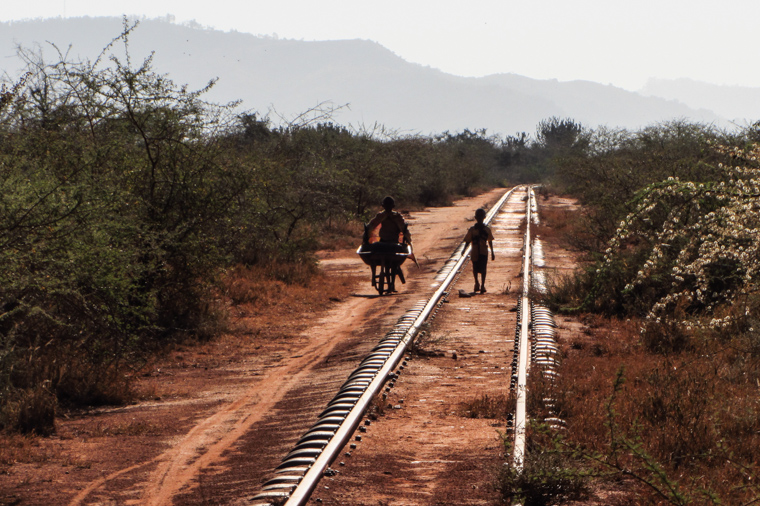 The walk along railway

Subsequent road becomes extremely unwelcoming. It is mostly sand, potholes, ruts and “grater-like” surface. Sometimes we pass a single speeding bus, but traffic is generally negligible. We get to Mwatate and as we look at the map at road crossing, a van pulls up next. We probably seem to be a bit lost which is truth to some extent. The driver helps us to find the way out of the town and a moment later it turns out that his passengers on board are tourists from Poland. It is a very nice and unexpected meeting. We tell them about our trip and how it has been to cycle for more than a month from Lake Victoria in the hope of reaching the Indian Ocean. They say we look malnourished, so they hand us some biscuits, beverages, bread rolls and other goodies from their hotel lunch buffet as they suggest “you need that energy and calories much more than we do”. 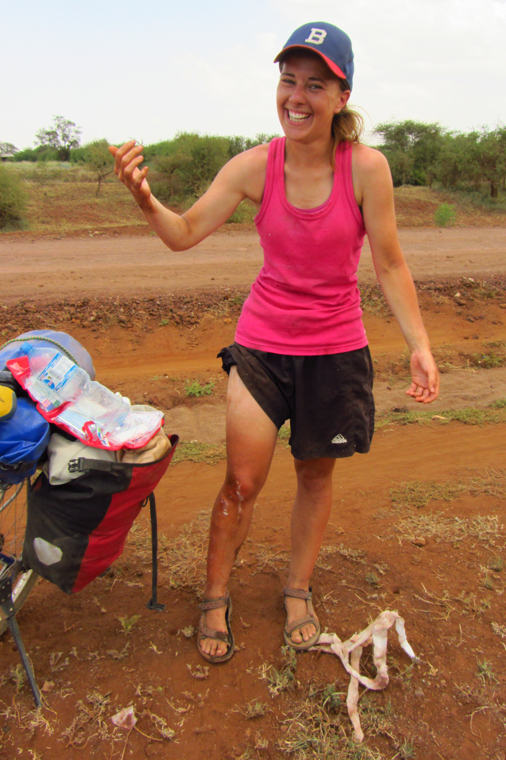 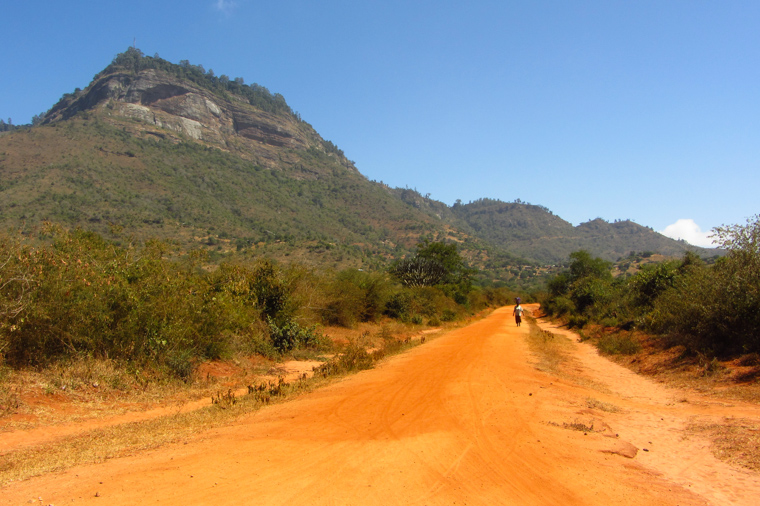 In a random bar we get to know Amateshe, a superintendent being in charge of several schools in the area. He is sipping brandy with one of the teachers to make this hot afternoon a bit more enjoyable. Amateshe insists that we sit down by his table. He suggests getting something to drink, shortly after invites us for dinner and finally we drive altogether with his wife to Voi, a town some kilometers away. 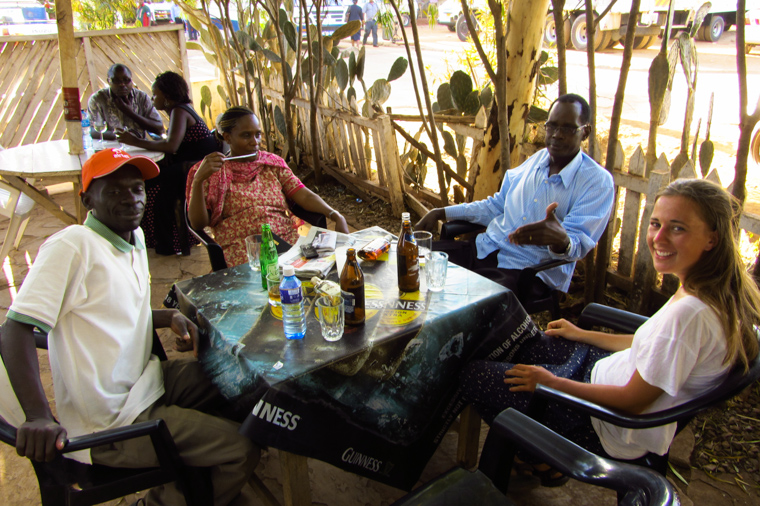 Wine and dine with Amateshe

This casual acquaintance turns into a genuine meeting of the new rich African middle class. There, exactly today, Amateshe needs to buy a new TV and replace old tires in his car. He orders a chicken to take away, which later will be served by his maid in the house, before which we need to instal a new fan in a room.

Sometimes you have to do something to show off, just like cruising around and introducing white visitors to all your friends. By the time this unusual evening is finished, I wonder what the hell is all this behavior about, apparently nowadays nearly equally visible in the European culture as well.

In the morning, before we leave we get four eggs and two cans of Red Bull as a gift. Most likely the cans must have reached Mwatate in a very intricate way, it is first time I see these in Africa. 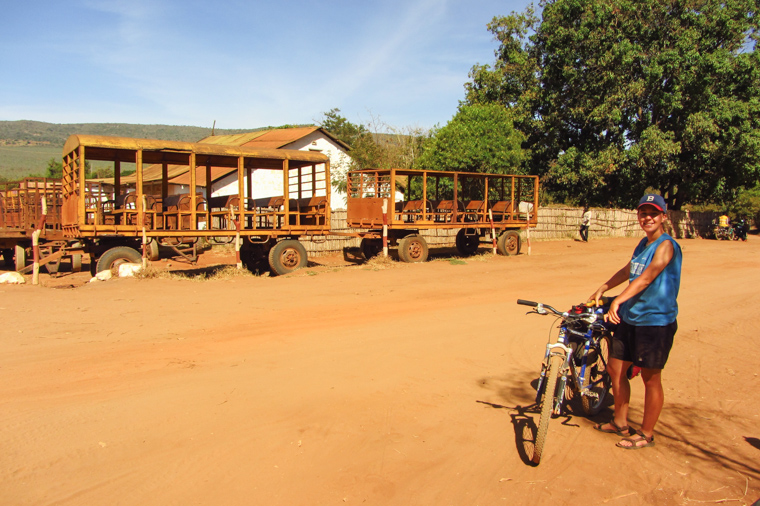 We return to our daily routines and concerns. This time I have to swap some bike tires. To be more specific, I need to use power tape to strengthen the weaker rear one and put it in a place of the front one. This operation will be repeated many times, also involving rotating tires in Signe’s bike to keep their usage equal and prevent accidental explosion. 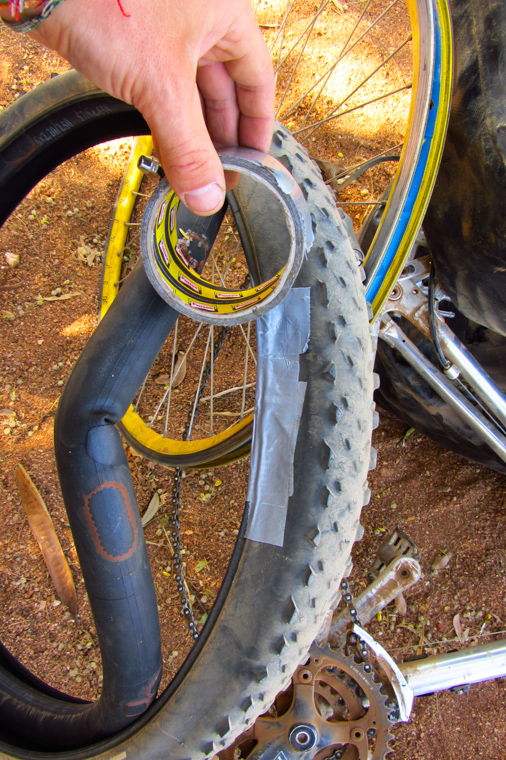 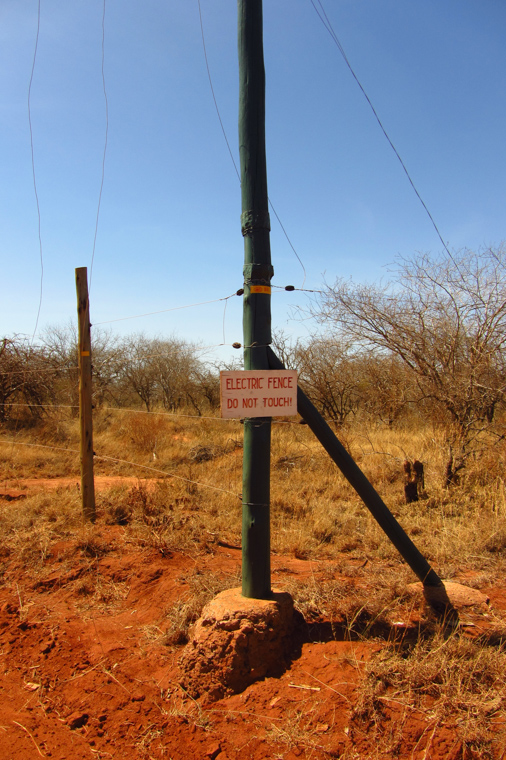 Electric fence to keep elephants off the villages

We go through the Taita Hills, lands inhabited by people of Taita. The road is sandy and the only way to keep riding is to detour via thick thorny trees and dense bush. In some moments I have to use a machete to get through this madness. 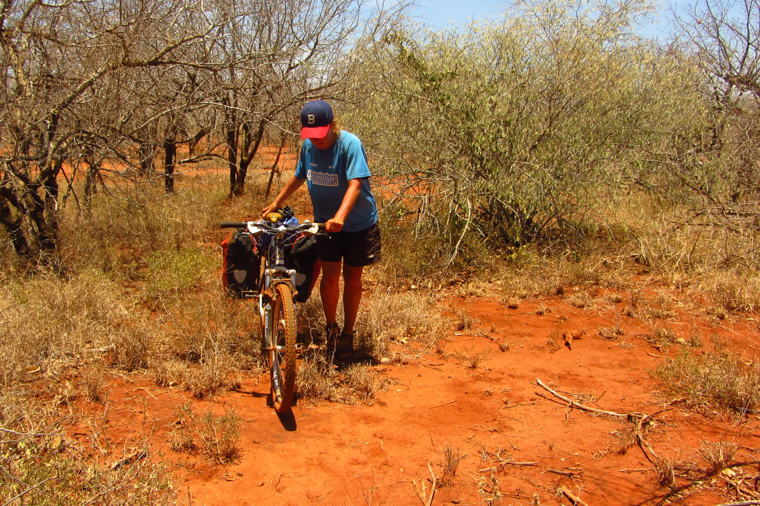 You need a machete to pass through a bush like that

We pass a man on a bicycle with two heavy jerry cans of water clearly having difficulties making it through the deep sand. I again realize how easy our European lives are. One reasons is that we do not have to struggle through the road everyday just to get water. 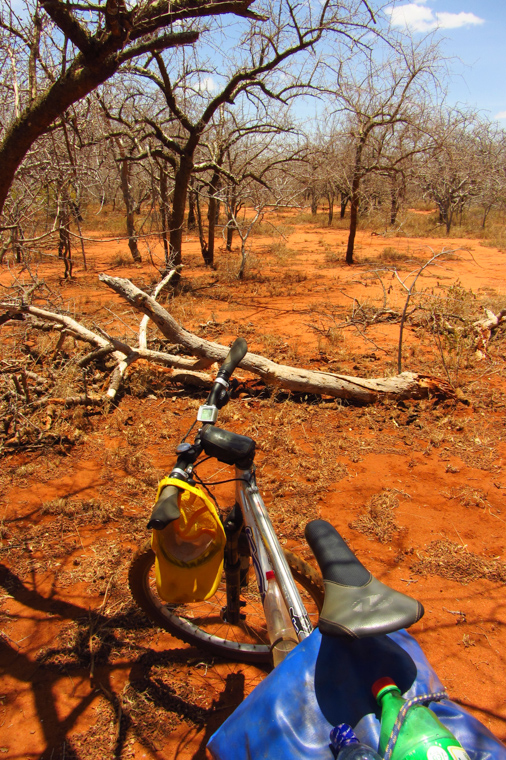 Easy road will take you nowhere

We get to Rukanga, then Bungule, both villages located at the foothills of Kasigau (1641m). We stop to plan further part of our travel, however asking nearly all residents brings no help. We find out that the dirt road to Kilibasi and Shiambini does not exist. 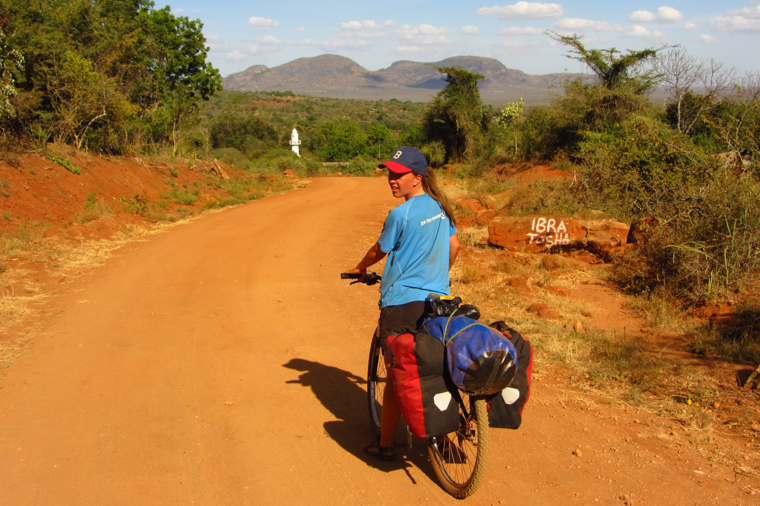 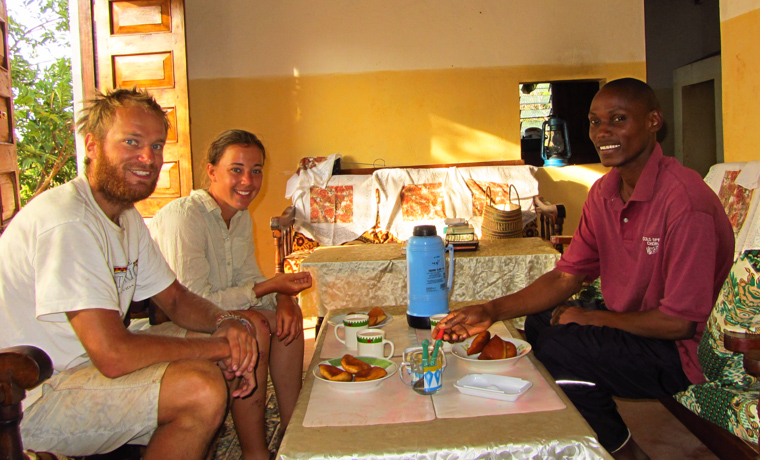 Breakfast with Patrick, a priest in Bungule 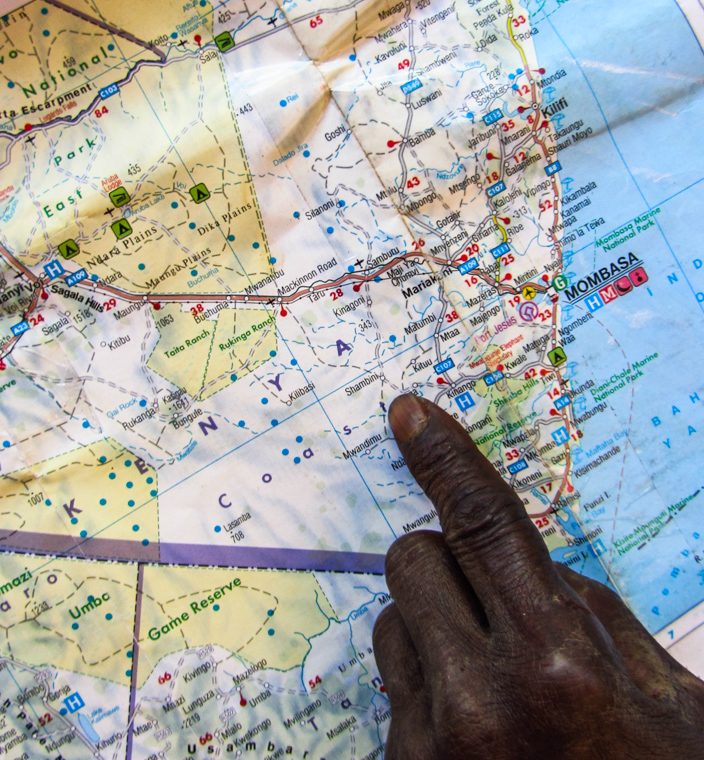 The road we are looking for doesn’t exist

An alternative route leads through a wild and desolate Taita Ranch and Rukinga Ranch. For a lack of a better choice, we head that direction. 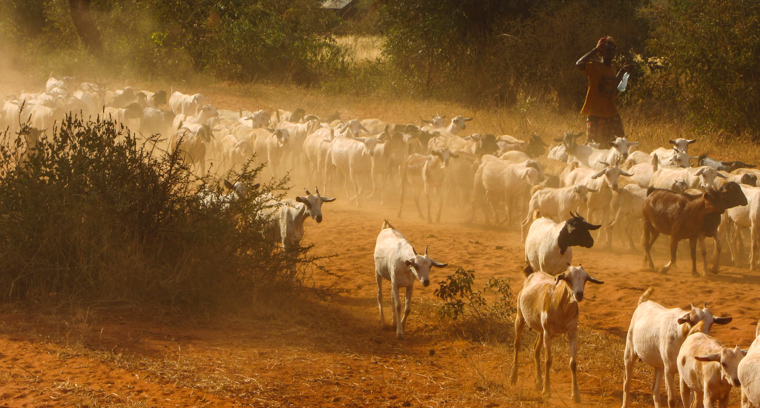 Goats being taken to pasture

Right from the beginning we enjoy the beauty of surrounding nature. On our way we meet only numerous gray rodents (squirrel-like), zebras and warthogs. Until now. At some point Signe notices a big group of elephants crossing the road some 250 meters in front of us. This is a family numbering several individuals, adults with their young. In such situation we need to remain absolutely calm. And wait. We hold on for 10 minutes and try to move along the road accelerating a bit, going faster and faster, until suddenly it turns out that the largest of the elephants is on the left side of the road. Nearly terrified we accelerate as much as we can and at that point the adrenaline pumps up. Just around the corner, a couple of meters off our path we notice the whole herd of elephants. Luckily they get scared and chase away, just as us. Probably the sudden surprise has saved us, had the elephants a moment to think, they could have decided to face the intruders disturbing their peace. 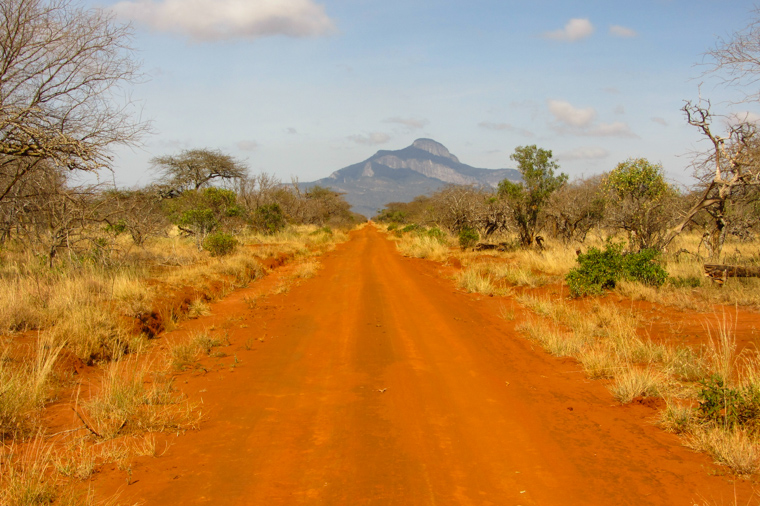 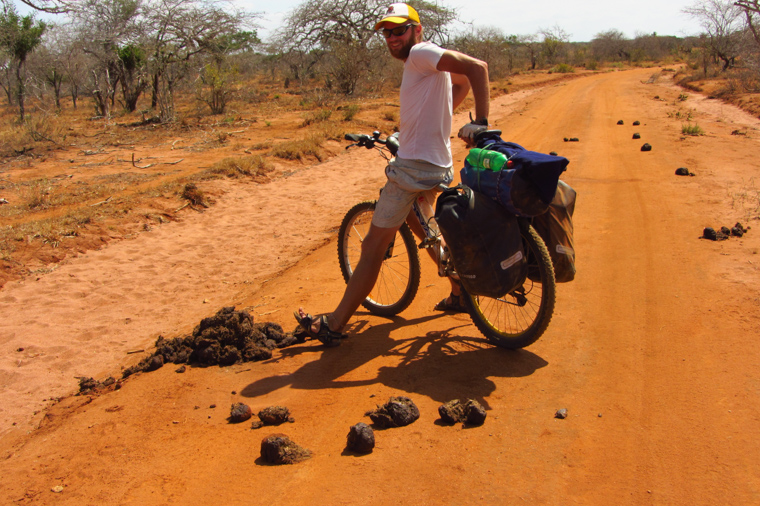 A proof that elephants have been here not long ago

Africans believe that elephants are far more dangerous animals for humans than lions. Meeting single elephants and finding ourselves between the young and their parents are situations especially dangerous. This is knowledge we have acquired on our trip and we will try to abide by. 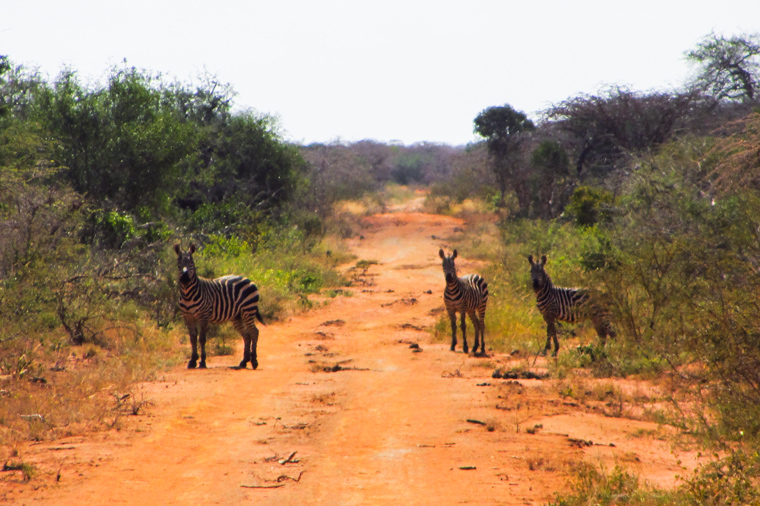 Zebras on the way through Taita Ranch

For another 50 km we meet only two Masai. Their occupation is freelancers specializing in looking of lost cattle.

Towards the Indian Ocean

In the end of the day we arrive at Mackinnon Road and it is our return to civilization. 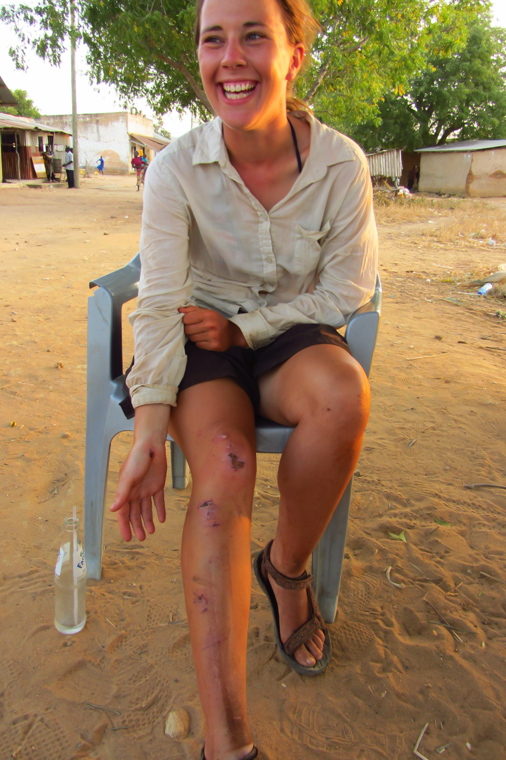 Not enough time to heal

Entering most of Kenyan restaurants, when you ask the question “what do you have to eat?”, you usually hear the answer “we have mandazi, chapati, tea…. and we have food.”

Then you place an order – “We would like to have two mandazis, two teas and two food.” Always there is a bit of surprise with the mysterious “food”. Today, it is the meat of goat, sometimes it is rice and beans, sometimes cow’s intestine, very variable.

In the evening we pitch our nearly worn-out tent next to the house of Msena Lugwe Joto in Kingoni. Our host is a primary school teacher and is fascinated in cultural exchange.

During the dinner he keeps asking questions like “How much in your country you need to pay to marry a woman?”. According to local customs, dowry is usually between 10 and 20 cows, half of which is expected to be paid cash and an optional conversion rate of “one cow equals six goats” can be applied. 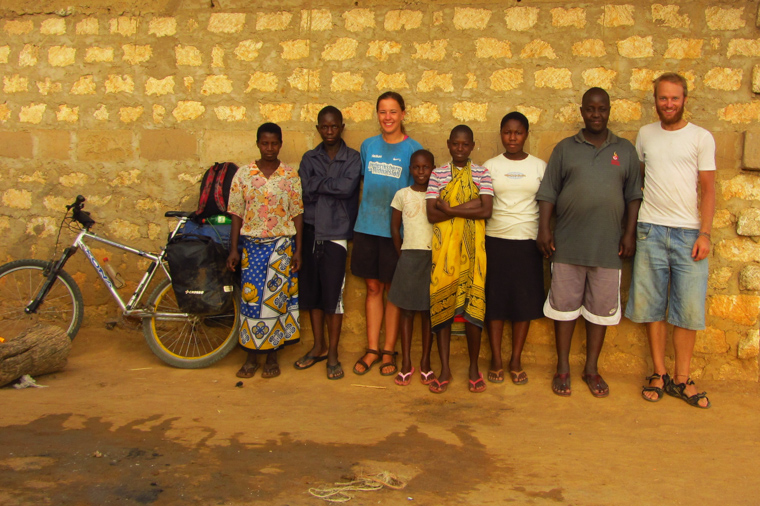 We pass through the Shimba Hills, supposedly also inhabited by elephants, so to prevent similar surprises as the elephant surprise at Taita Ranch, we rent a motorcycle to assist us.

Another day passes. We are looking for shortcuts cutting through local villages, subconsciously heading east. At some point we can see our destination at the horizon. The Indian Ocean!

A few more ups and downs and we arrive at the coast. We instantly ditch our bikes and jump into 28 degrees warm water. It is pure happiness of arriving at the destination of a two thousand kilometers and five week long adventure. A dream that came to reality! 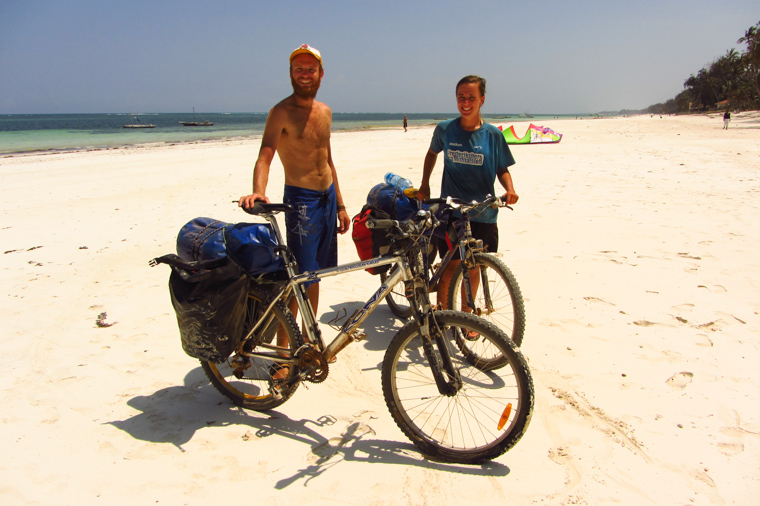